I’ve been meaning to write this for a good year or so, because it keeps coming up in different arenas – this is not an SNP issue, it’s a society issue. However, since it’s come up again and since there seems to be a lot of confusion around it this time, I’m going to cover a few different things at once.

One of the biggest things we have to deal with when we’re talking about equalities is that people imagine there’s a clear distinction between ‘a good person’ and ‘someone who does racist/sexist/whatever things’. Bad people do racist things; good people do not. If we are good people, then the things we do cannot be racist. And because we don’t actually hate people of colour, or women, or Jewish people, then our actions can’t be racist or sexist or anti-Semitic.

Unfortunately, it’s not that simple. Experts in the ways in which systems of power and inequality sustain themselves have talked for decades about unconscious or implicit bias which support the more obvious types of bigotry like slurs or hate crimes. These unconscious biases are things we all have – all of us. It isn’t about being a good or a bad person, because everyone reaches adulthood with a whole mess of ideas and reactions we’ve picked up because we live in an unequal society. There are cultural messages which we repeat without realising it’s what we’re doing.

I joined the SNP specifically because of their decision to support disabled people even when we didn’t have much political power. I have been grateful in my time in the party to have had the opportunity to develop the Disability Equality Training, which was such a positive experience. At the conference in October, I managed to get a really popular resolution remitted back because the people in the conference hall were willing to learn – none of the people there hated disabled people, or wanted us to suffer, but they didn’t see exclusionary statements until it was explained. I am immensely grateful that they were willing to look at it again, realise they hadn’t understood how it excluded disabled people, and then adjust their opinion with the new information. 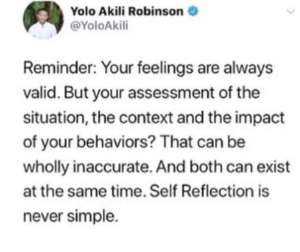 It’s hard to look at your own behaviours and beliefs and realise you have acted in a way which harms someone, even if you didn’t mean to. Believe me, I know what I’m talking about – I used to be a unionist, and realising I was wrong was hard. It took time, and effort, and the willingness to be uncomfortable. I used to believe that being a good person was enough to mean I’d behave well, but becoming immersed in equalities research and training has shown me time and again that it isn’t enough. Again, it’s not about being good or bad people. It’s just that we all have things we don’t know enough about, like with the above resolution. If I’d just said, ‘this is ableist’, most people would have told me they’d read it and it definitely wasn’t, but they’d have been wrong. I had to explain carefully why it was important to include disabled people, what the risks to our health were, why bans are dangerous if not thought through carefully. A lot of people told me afterwards that they hadn’t thought about it like that until then, but that I was right.

So what does this have to do with the anti-Semitism row? Most people who have been telling me that the blog post was not anti-Semitic are not people who have enough background experience of anti-Semitism to make that judgement. It’s not that they’re ignorant or bad people, just that it’s not something they’re experts in. It’s the people who are affected by a type of discrimination who get to decide what it looks like, and Jewish people have told us it was anti-Semitic and explained why, so we have accepted that. It’s not about ‘trying to please the unionists’, or ‘virtue-signalling’ or whatever else. It’s about trying to be consistent in our approach to equalities.

The explanation is as follows: if you are writing about a union leader who is Jewish, bringing up Hitler’s view on unions – that they were dangerous because Jewish people controlled them – and then specifically talking about the Jewish union leader implies a link. Otherwise there is no reason whatsoever to start quoting Hitler. It essentially says ‘Hitler believed that Jewish people controlling unions was bad, and this person is Jewish and is controlling a union in a way I don’t like.’ The link between those two dots is ‘so maybe he had a point’. It was certainly framed as a negative – ‘you shouldn’t act like this if you are leading a union because you’re proving Hitler right’ – but that doesn’t mean the link was any less implied.

Just because he wasn’t literally saying ‘I hate Jewish people’ doesn’t mean there isn’t anti-Semitism in his statement. This is the power of dogwhistle statements – the whole point of them is that they seem innocuous, inoffensive to the people who don’t know what they’re looking for. Dogwhistles are very common, and are often passed on by people unintentionally. If you’ve ever had the experience of people suddenly getting angry with something you’ve said, saying it’s a bigoted statement, it’s likely you accidentally picked up a dogwhistle and repeated it. Your not meaning any offense doesn’t mean it wasn’t harmful.

The thing that really makes me sad about all this, though, is that these ideas are not alien to the people currently insisting there was no anti-Semitism in the blog post. These are the same people who could recognise the Islamophobia in Cllr Scott Arthur’s poll on why Humza Yousaf joined politics – they could recognise that it was his being a Muslim of Asian descent which made that poll Islamophobic. They’re the same people who recognise that a Scottish Unionist MP doesn’t have to explicitly say he hates Scotland to act in ways which demonstrate an underlying belief that Scottishness is something to be embarrassed by. So it’s not that the people defending GB are unable to notice context and subtext. It’s just that, when it’s one of our own, someone we admire, our bias in their favour overrides that impulse to think critically.

Not that we shouldn’t give people the benefit of the doubt, as most people did at the beginning – it’s one thing to accidentally use some anti-Semitic dogwhistles in writing and then, when it’s pointed out, immediately acknowledge the harm and adapt the article. It’s quite another to insist that Jewish people are less able to identify anti-Semitism than random non-Jewish people whose knowledge of anti-Semitism only extends to the dictionary definition. All of us are learning, but if we only learn when it’s convenient and doesn’t challenge our preconceptions, then we certainly can’t consider ourselves intellectually honest or progressive.

The left is pretty good at recognising bigoted rhetoric when it’s about race or gender or Muslims. But we are less able to recognise anti-Semitism – we hold it to a different standard. This is partly because of how ancient conspiracy theories about Jewish people are bound up with critiques of global capitalism, and partly because we tend to be anti-colonialist. Many people on the left are not great at nuanced criticisms of the current government of Israel and its cruelty, and accidentally invoke anti-Semitic principles when they’re just trying to say ‘the people in charge of the state of Israel commit atrocities in their imperialist venture’. People who are entirely reasonably angered by their actions express that horror with passion and ferocity, but often without carefully drawing the boundaries of that anger.

And, to make sure I wasn’t, as some have suggested, just ‘virtue-signalling’ and ‘falling for Labour lies’, I sent the article to a number of Jewish friends I have in other countries who don’t know any of the parties involved, with the simple statement attached that Rhea Wolfson is Jewish. They all responded with similar statements – that the article included a number of anti-Semitic dogwhistles but that the section quoting Hitler and implying she had fulfilled his warning about unions and Jewish people was particularly horrifying.

And yes, of course there are more egregious examples of bigotry in Scottish politics. Of course we should be more concerned about obvious bigotry in people who have passed vetting and are in elected office in other Scottish parties than we are about a random blogger who happens to be an ordinary member of the SNP. But I am not willing to consider ‘not as bad as the Tories’ the standard by which I judge our actions. I do hold our people to a higher standard than the Tories because I expect Tories to make racist, sexist, ableist statements. I expect them not to care when people point out the harm they’re doing. I expect more of our people, myself included.

To finish with, here’s an excellent video on why it’s not enough to just think of yourself as a good person. It takes practice to unlearn the inequalities we are all living with, or to account for them.

3 thoughts on “Holding Ourselves to Our Own Standards”